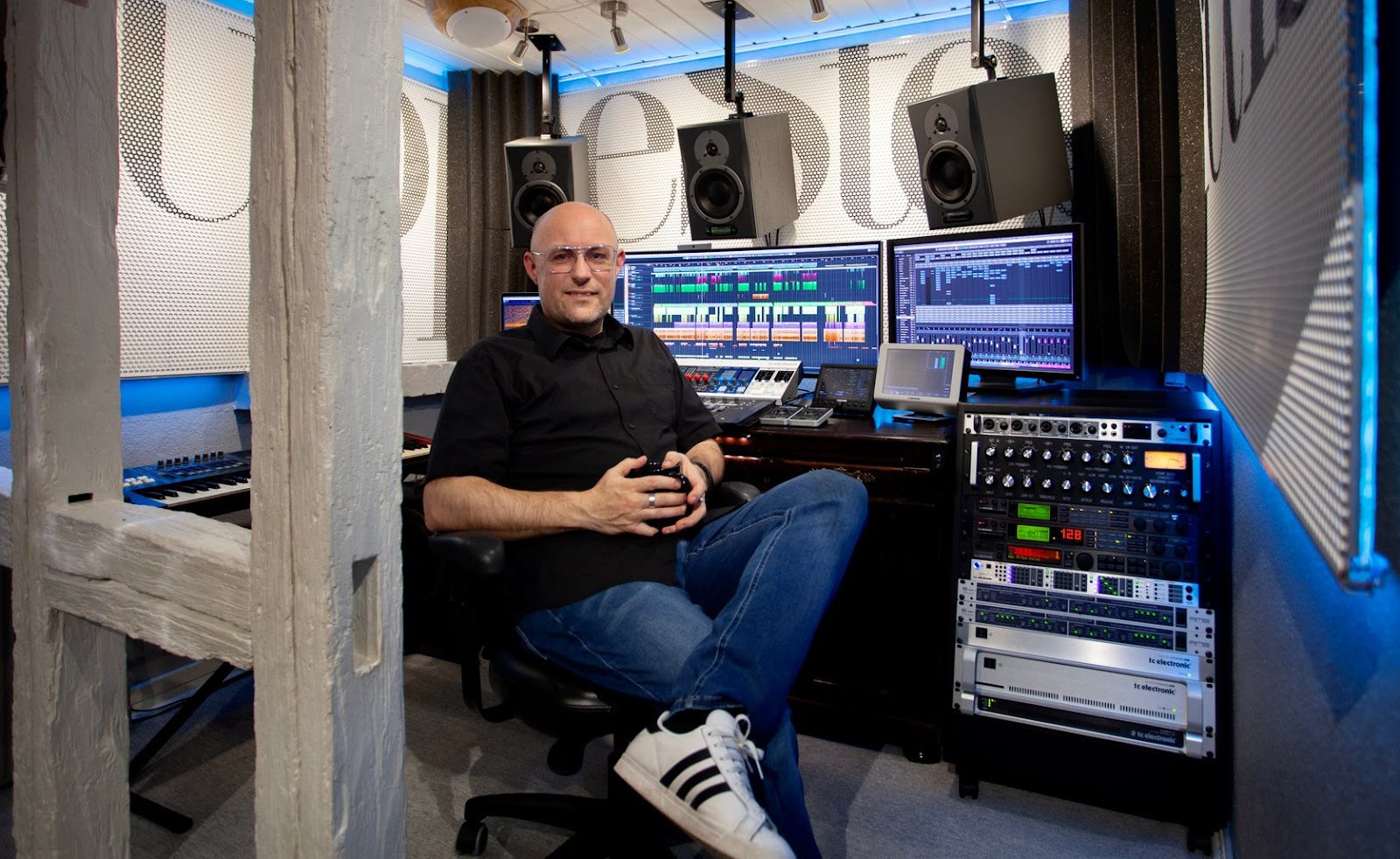 Christian G. Frandsen is an immensely talented audio engineer from Denmark. He currently works for TC Electronic as a product specialist and also has his own studio, CGF:LAB. For the past several years, Christian has been diligently restoring a live 1981 performance by the celebrated Danish pop band TV-2. With the project now complete and the album receiving rave reviews, Christian joins Audionamix’s Steve Oliver to discuss the story and technical processes behind this incredible restoration.

What’s the story behind this project?

Christian Frandsen: TV-2 is one of the biggest pop acts in Denmark. They started in 1981 during the period of the cold war being new wave, post punk and Kraftwerk inspired. After a few albums they broke through and their impressive career really took off. From around 1985 they were among the biggest acts in Denmark and have stayed at the top since then releasing 27 albums. They are still going strong and at the time of writing they are touring in Greenland. Read more at http://www.tv-2.dk/index-english.html

How did you become involved with the band?

CGF: My 16 years older brother Anders G. Frandsen started as their Front Of House engineer in 1981 and toured with them till the mid 90’s. In 1981 I was 10 years old playing with Lego while listening a lot to cassette tapes of TV-2. These tapes were console output recordings made by my brother at gigs with the band. It had a huge impact on me following his work and TV-2 through these years and this is basically why I work with audio today as a product specialist at TC Electronic and in my spare time work in my own studio CGF:LAB.

My brother died suddenly in 2008 and I inherited some of the tapes. It was not until 2016 during restoration of my own band performances as a drummer that I suddenly remembered the tapes and thought that maybe the TV-2 cassette tapes had a chance of being optimized using modern technology so they could be enjoyed by the fans.

Why did you choose this particular show to be remastered?

CGF: The first tape in the collection especially drew my attention – a show from Oct 2nd 1981 and recorded in Holbæk, Denmark. Probably the band’s 20th gig overall. It sounded quite good and had tons of great energy, but it was also quite obvious that thorough restoration was needed to make it stand as a potential release. After a few test-optimizations I got in touch with TV-2 to hear their reaction. I was rather unsure if they would like it, but fortunately they did and agreed to continue trying to restore the tape. At this time, I didn’t know if I would succeed, or that it would end up taking me 5.5 years of work in the studio, along with many pleasant and productive meetings with the band. Plus that I would need help from state-of-the-art technology from Audionamix, from an audio research colleague, Asger Lundsgaard Hansen, and from other high-end audio tools.

How did you initially start working with Audionamix technology?

CGF: During the initial tests, it became clear that in some parts of the concert, the lead vocals were so acoustically and electrically distorted on the old cassette tape that it could neither be saved nor stand the distance to a release. This was a showstopper to the project and I was rather desperate. After much searching, a possible solution emerged a long way from Denmark in Los Angeles – Audionamix was specializing in cutting vocals out of a stereo recording with surgical precision. They had just developed technology strong enough to remove the original vocals and allowed us to record and mix new vocals in.

What was your process for removing the vocals?

CGF: As the process spanned so many years, I went through multiple versions of Audionamix’s tools and to my great appreciation the technology developed and was regularly significantly refined. Separation artifacts were rather audible in the first years but became much less obvious later. Such artifacts remain the main challenge of source separation technology in general but it depends very much on the project whether that is a problem or not. I am also sure the technology will develop much more in the coming years. There are so many use cases for it.

I started the process by using the stand-alone application TRAX PRO, which I really liked working with. In this application you use spectral views and selection tools, that are great and precise, to put the vocal in one file and the remaining sound in another and it has an intelligent assistant to initiate the process. The challenge is to identify all relevant signal parts and that takes a lot of experience. So at this point it became clear that there was a limit to what I was capable of and we decided to ask Audionamix, Steve Oliver to help us by using their service. Steve was super enthusiastic and fantastic to work with during the very long process. This was an enormous help and the results became absolutely excellent.

Further, I used Audionamix VVC for all parts with original 1981 vocals. VVC could isolate lead vocal and a lead/solo instrument so it was a great way to remix such elements. I used it to ensure the leadvocal “stability” in the mix. Similarly selected guitar and synth elements were “stabilized” in the mix this way. It was a fantastic plugin to work with and it made the re-mixing job really precise and easy.

Steve Oliver: When Christian contacted me, he had already done much of the work to isolate and remove the original vocals using TRAX PRO. At the time, the software was able to remove about 90-95% of the vocal.  I used refined spectral editing techniques to pull out the remaining bits of vocal and fill in the instrumental. Christian was kind enough to give me detailed notes to help preserve the original sound. As an example, when vocals are removed from a mix it can affect the treble/high frequencies, especially hi-hats and cymbals. We worked hard to maintain the detail and air in the top end. And this level of care was applied to every instrument and element of the mix. Christian’s appreciation and love of the material really shone through, and it was a great joy to collaborate with him and for us at Audionamix to be a part of this project.

What additional techniques were used after the vocals were removed?

CGF: The newly recorded vocals sounded very clean from the start due to modern equipment while the mix, on the other hand, contained some distortion from the cassette tape and 1981 equipment. The profile of the original vocal’s dynamics, distortion and effects like echo and reverb etc. were extracted from the cassette tape and were recreated on the new vocal using both 1981 effects (where possible) and modern effects. Everything was fine-tuned manually by ear for every second of the concert to continuously ensure the best possible mix.

What other corrections were made to the recording?

CGF: The cassette tape was stored for 35 years before it was transferred to a computer and while tape can last for many years, it must be under the right conditions. We were lucky that heat, cold, moisture, aging and magnetism had not damaged the tape more than could be restored. It turned out that the original recording was made on a semi-defective tape recorder and it required assistance from my colleague Asger who thoroughly researched possibilities using mathematical tools to find the optimal reconstruction of the sound. This was a huge help too.

Throughout the long process, focus has been to be true to the original concert, the natural feel and true to the intention in 1981.

What has the reception been to the album?

CGF: A circle is drawn and it has been a huge pleasure and a great challenge to help this concert on its way. I am very grateful that TV-2 has been so obliging and patient in the long process.

The album was released Jan 1st 2022 and it immediately received an absolutely amazing and very rare 5 out of 6 stars in the biggest Danish music magazine Gaffa. When the vinyl was released it went to no. 1 on the Danish Vinyl charts and it went to no. 7 on the album charts. Further, it has received many excited comments from TV-2 fans old and new on social media channels, including the band’s Facebook page.

It has been a privilege to work with Christian on this project which we never thought would be realized. It took nearly 5 years so the band really didn’t believe it would work. But technology, Christian’s patience and the good work of Audionamix made this possible…. We are more than happy with the result and it looks like we all are starting a new trend.

Check out a promo video for the album: