Audionamix Heads to the Top of the Class at Rock Central

WISCONSIN – Drummer and drum instructor Jeff Holden is a life-long musician and student of music. He has recorded with legendary Milwaukee hard rock band Bender, his music has been featured in the hit film 3000 Miles to Graceland with Kevin Costner and Kurt Russell, and he was nominated for the Wisconsin Area Music Industry (WAMI) drummer of the year award. He now teaches drums for Rock Central, a non-profit music school located in Lake Geneva, Wisconsin, dedicated to enriching the quality of life for children and adults of all ages through accessible music education and experiences. As part of his drum curriculum, Holden uses Audionamix’s XTRAX STEMS to isolate, solo and mute drum tracks from popular songs in order to help guide his students in finding their musicality. 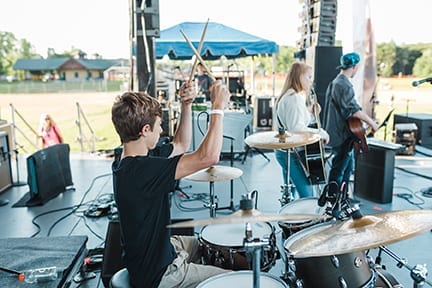 Holden uses XTRAX STEMS to mute drum tracks from mixed songs for the Rock Central students to play along with the remaining music. He found that when students played their parts without the support of the backing drum track, they were better able to feel out the groove of the song and expand their creativity by formulating their own drum riffs.

Holden also isolates the drums using XTRAX STEMS to provide students with a first-hand look at a drummer’s style. He uses this drum extraction to evaluate students’ cognitive recognition of the snare and kick drum sections—how they sound and how they affect the rhythm of a song. For younger students, Holden builds auditory development by teaching them to identify the different drum sounds and components and asking them to describe what the drums are playing in a given track.

The dedicated drum tracks also help students effectively learn and practice the drum stem without distraction from the other music. “Our most talented students were recently given a song for an audition,” says Holden. “The song was ‘Red Barchetta’ by Rush, which is a really difficult song to play. I used XTRAX STEMS to pull the drums out and gave them the musical track to play along with, and the dedicated drum track for practice. There was a part in the song where I couldn’t really decipher the specifics of the drums, so I wasn’t expecting them to be able to, either. One kid nailed it, so it definitely makes a difference.”

Prior to discovering Audionamix XTRAX STEMS, Holden purchased karaoke tracks, which were expensive and not always accurate. He also called upon instructional drum books, most of which did not feature popular songs. Holden believes that teaching songs students know and like is a more productive approach. XTRAX STEMS has given him a near-infinite number of learning tools for students, at a much lower cost, and he can use songs that are relevant to the age group that he is teaching.

Holden is working to have Rock Central purchase educational editions that will benefit all its students, especially those in the vocal performance track, who sometimes have trouble determining if they are sharp or flat. “XTRAX STEMS is a glimpse into the future of music lessons and provides students with truly boundless benefits when learning to create music,” adds Holden.

XTRAX STEMS automatically separates songs into three parts: vocals, drums and remaining music. Its simple workflow is optimized for teachers looking to separate songs into stem components for educational or practice purposes. The software is compatible with both Windows (7 SP1 – 10) and Mac (10.12 – 10.14) operating systems. New users can purchase XTRAX STEMS for $99. The AI algorithms were recently improved in the free XTRAX STEMS 2.2 update, which will provide cleaner automatic drum isolation and removal.